GOT IT COVERED PHOTO GALLERY

Did you see our Youth Theatre members on BBC Children in Need​ Got It Covered? Catch it again on BBC iPlayer​ until 29 November. It’s a beautiful and moving programme about the making of the Children In Need charity album – our young people recorded a song with Suranne Jones!

BBC Children in Need​: Got It Covered

Young people from across Half Moon Theatre’s Youth Theatre groups have recorded a pop song with TV star Suranne Jones, as part of the BBC Children In Need: Got It Covered charity album.

20 young people aged between 9 and 14 joined the star of Doctor Foster and Gentlemen Jack on her cover of ‘Symphony’, by Clean Bandit. The song was suggested by Youth Theatre members during their first session with Suranne and they were delighted when she picked the song to feature on the album of covers. Renowned vocal coach Mark De-Lisser worked with the young people over a number of sessions to prepare them for the recording session at Abbey Road Studios.

BBC Children In Need: Got It Covered features 11 critically-acclaimed actors from stage and screen, including Olivia Colman, David Tennant and Jodie Whittaker, who have banded together to help make a positive difference to the lives of children and young people throughout the UK.

A special 90-minute entertainment documentary showcasing the entire recording process will be broadcast on BBC One on Wednesday 30 October at 7.30pm, ahead of the annual BBC Children in Need Appeal show, featuring exclusive behind-the-scenes action and special guest appearances.

The programme will also shine a light on the projects funded by BBC Children in Need, with a selection of the actors visiting projects to see first-hand the difference their support makes to young lives. This includes Suranne visiting Half Moon Theatre, Limehouse, and working with some of our Youth Theatre members.

Funding from Children in Need enables Half Moon to provide one-to-one access support for anyone who needs it to take part in Half Moon’s eight Youth Theatre groups.

“We are so proud of having had the opportunity to work with Suranne Jones and Mark De-Lisser to create a unique song for BBC Children in Need: Got it Covered,” said Beccy Allen, Head of Creative Learning at Half Moon.

“It has been an exciting and enriching experience for all our young people and given them a once in a lifetime opportunity to record a song at Abbey Road and have their voices heard on a unique album and TV programme,” she said.

“Access for all is at the heart of everything we do at Half Moon and, thanks to funding from BBC Children in Need, we are able to provide one-to-one access support for anyone who needs it to take part.”

The BBC Children in Need: Got It Covered album will be released on Friday 1 November in conjunction with Silva Screen Records. All profits will go to BBC Children in Need, with a minimum of £1.50 per album (charity number 802052 in England & Wales and SC039557 in Scotland).

BBC Children in Need relies on the generosity and creativity of the thousands of supporters and fundraisers who raise millions of pounds for the charity every year. To date, the UK public has raised over £1 billion for children and young people facing disadvantage across the UK.

BBC Children In Need: Got It Covered Photo Gallery
Hover over the image below to view the gallery’s navigation. 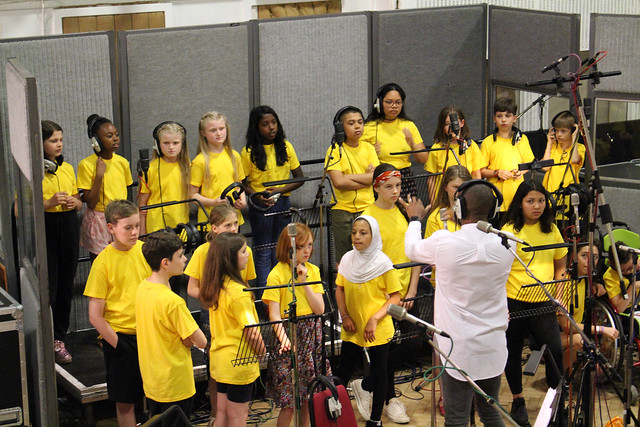 Send us a message

We are supported by